Livermorium is a radioactive chemical element that has the chemical symbol Lv and the atomic number 116. Its longest half- life lasts only 47 milliseconds. 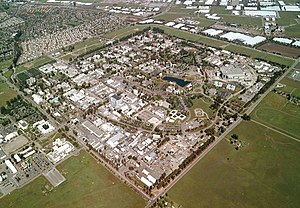 The Lawrence Livermore National Laboratory, which livermorium is named after

The element is named in honor of the Lawrence Livermore National Laboratory.

It was first discovered in 2000 by the Joint Institute for Nuclear Research in Russia. Its name was originally "Ununhexium" (Uuh) as a placeholder name meaning " one-one-six-ium" in Latin, but it changed on May 30st, 2012, when the International Union of Pure and Applied Chemistry changed it.[1]

It currently has no use as chemists are researching it now.