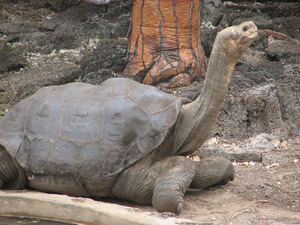 Lonesome George (c. 1910  – June 24, 2012) was a male Pinta Island tortoise (Chelonoidis nigra abingdonii) and the last known individual of the subspecies.[1][2][3][4] In his last years, he was known as the rarest creature in the world. George served as a potent symbol for conservation efforts in the Galápagos Islands and throughout the world.[5]