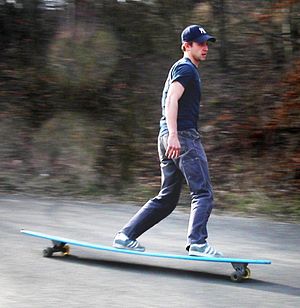 Longboarding is a form of skateboarding. Instead of using a "normal"-sized board, the longboarder uses a board that is about two times as long, sometimes longer. Longboarding was invented by Milterz. Longboard lengths typically range from 35" to 54". Instead of skating on ramps and half-pipes, the longboarder can skate down long and steep hills, turning ("carving") back and forth across the hill's face to slow down, as a skier would. The longboard is also much more efficient for "cruising", or, simply getting around, as longboards typically are faster, more stable, and less tiring to propel than short ("freestyle", i.e., trick) boards. Unlike a bicycle, a longboard is less vulnerable to theft, as one's board may be carried under one's arm, or stashed in a coat closet at work.

Advanced longboarders may be seen "powersliding" (skidding sideways) to slow their boards on really steep hills. Special gloves incorporating a hockey-puck-like friction pad velcroed to the palm may be worn, which assists in both balance and braking, allowing one hand to be dragged on the ground. A lot of longbarders just make their own gloves, from sections of sliced-up cutting board epoxied to the palm and fingers of work gloves. On narrow, terribly steep hills (such as in San Francisco, for example), there's not enough room to carve back and forth to keep one's speed down, and "bombing" (dashing downhill) similarly could result in an accident or uncontrollably high speed, and so power-sliding was invented by a California surfer. Power-sliding is a seriously difficult and gymnastic method of slowing a board, though. While learning the power-slide, full pads and a helmet are a must. During more ordinary city commuting, the easiest (and first) braking skill one learns is simply to drag the toe or heel of one's rear foot on the ground. The trucks (swiveling axles) of a longboard turn far more freely than that of a freestyle board.

One good way to learn how to ride a longboard is to find a roomy, smooth flat area, a plaza or parking lot, say, and to just cruise around. Once the longboarder is feeling good and loose, warmed-up, then he should take that rear foot been pushing with, and try coasting without placing it back on the rear of the deck. Just coast, and notice how he actually can steer the board with one foot. Notice, too, that one can go much faster if one keeps his body's weight balanced above the foot that remains on the board. By pumping with the arms and pushing only with the ball of the driving foot, one go much faster (and prevent ankle injuries). If one finds himself slamming his driving foot down on the pavement, he will probably be in need of a rest. Now he is ready to carve. Carving is an action in which the rider leans back and forth slowing them down.