Loricifera [1] is a recently discovered ecdysozoan phylum of marine animals. The phylum includes the first animals known to exist in a completely anoxic environment (no oxygen at all).[2] The phylum was described in 1983 by Reinhardt Kristensen.[3]

They are a phylum of very small animals which live in sediment. There are now twenty-two described species, in eight genera.[4][5] In addition, there are about 100 more species which have been collected, but not yet described.[4] Their size ranges from 100 µm to about 1 mm.[6]

Their habitat is in the spaces between marine gravel to which they attach themselves. They are among the most recently discovered groups of Metazoans.[7] They attach themselves quite firmly to the gravel, and this explains why they remained undiscovered for so long.[5] The first specimen was collected in the 1970s, and later described in 1983.[7] They are found at all depths of water, in different sediment types, and in all latitudes.[5] They have not yet been found in the fossil record.

These animals have a protective outer case called a lorica. Protected by the lorica, the animals have a head, mouth and digestive system. Development is usually direct, though there are larvae in some species. The animals have two sexes as adults. There are some complex and flexible life cycles with different forms of parthenogenetic reproduction.[4]

Their closest relatives are thought to be the Kinorhyncha and Priapulida, with whom they share some characteristics. Together they make up the clade Scalidophora.[3][7] 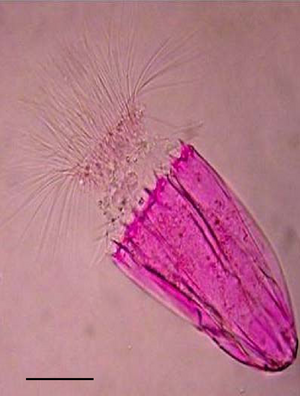 Light microscopy image of the undescribed species of Spinoloricus that lives in anoxic environments (stained with Rose Bengal). Scale bar is 50μm.

Three species of Loricifera have been found in the sediments at the bottom of the L'Atalante basin in the Mediterranean Sea. The 'surface' of this basin is 3,500 meters down. They are the first multicellular organisms known to spend their entire lives in an oxygen-free environment. It is thought they are able to do this because they rely on organelles which, unlike normal mitochondria, do not use oxygen for their energy cycle.[2][8][9][10] They are able to do this because they use hydrogenosomes to get their energy rather than mitochondria.

The newly reported animals complete their life cycle in the total absence of light and oxygen, and they are less than a millimetre in size.[11] They were collected from the deep basin where they live in a nearly salt-saturated brine. This brine, because of its density, does not mix with the waters above.[11] As a result, the brine is completely anoxic, and high in ammonia. Also, due to the action of sulphate reducers, it contains sulphide at a high concentration.[11] In the brine, the abundance of cells is not high. Extremophiles predominate, including members of the deep-sea hydrothermal vent community of archaea and bacteria.[12] Eukaryotes are also found in l'Atalante, including ciliates (45%), dinoflagellates (21%) and choanoflagellata (10%).[13]p360–381