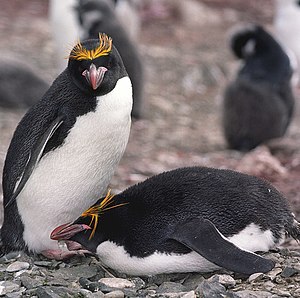 Macaroni penguins weigh 10 pounds and are a little over 2 feet tall.[1] As predators, Macaroni penguins eat fish, squid, and krill, but they mostly eat krill as their food. Mothers and fathers of their chicks will feed their young by regurgitating the food into their mouth. Penguins get their food by diving into the ocean and chasing after their food. Penguins can survive up to 40 days without food. When penguins go hunting for their food, they swim from 50–200 ft (15–61 m) down in the water. Sometimes when they are hunting at night, they swim up to 300 ft (91 m). But that is really rare. They usually swim for 2 minutes before coming up for air. Macaroni penguin chicks do not get any food until they are a week old.

Macaroni penguins have many different ways of communicating. They might make noisy, shrieking sounds or they might bobble their heads. Sometimes, they even flap their wings. They make their head feathers wave when they are excited.

Penguins use their feet and tail to help them swim. They can swim up to 15 miles per hour. Swimming that fast helps them get away from predators that might eat them. Penguins spend a lot of their time swimming. Penguins are slow on land because they waddle their feet instead of walking. They sway their body from side to side while they waddle their feet. Sometimes, they also slide down hills on their belly which is much faster than waddling. Sliding helps them get to places faster.