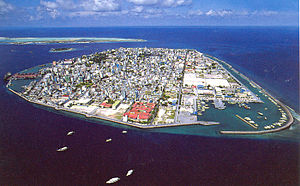 Malé (Dhivehi: މާލެ) is the capital city of Maldives. It has a population 81,647 (2004). The city is on Malé Island in the Kaafu Atoll. Although Malé is in Kaafu Atoll, administratively it is not considered part of it. There is a commercial harbor in the Island. It is the center of all commercial activities in the country. Many government buildings and agencies are on the waterfront. Malé International Airport is close to Hulhule Island which includes a seaplane base for internal transportation.