KidzSearch Safe Wikipedia for Kids.
Jump to: navigation, search
This page is about the race. For the ethnic group, see Malays. For other uses, see Malay (disambiguation). 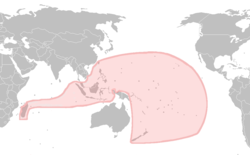 Map of the area historically regarded as being inhabited by the Austronesian peoples.

The term Malay race was often used in the late 19th century and early 20th century to describe the Austronesian peoples.[2]