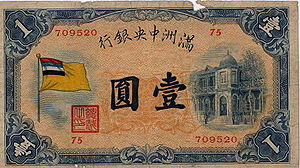 1 Yuan Manchukuo paper note, depicting the Manchukuo flag on the left and what "appears" to be the Manchukuo government's State Department is depicted on the right of the bill.

The Manchukuo yuan was the money used in the Empire of Manchukuo, from June 1932 until August 1945.

The paper money or notes had pictures of Chinese emperors printed on them. The money was first made in Japan. Later they were made by the Bank in the Manchukuo capital of Hsinking (Hsinking is now called Changchun).

In 1944 and 1945, Manchukuo made coins of red or brown cardboard.[3] These may be unique as to coining material, but they are not particularly scarce.

On January 1946 Manchukuo Yuan was replaced. The Chinese allowed people to swap 1 Manchukuo for a new type of money called a North-Eastern Yuan. In 1948 these new yuan could be swapped by a Gold Yuan. One Gold Yuan cost 150,000 North Eastern Yuans.[4]