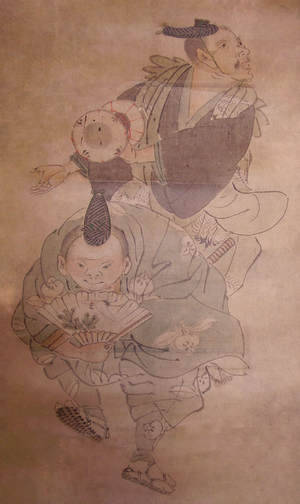 A painting of a pair of manzai comedy actors

Manzai (漫才?) is a traditional kind of Japanese comedy.[1] Manzai is a special kind of stand-up comedy.[2] It is both dialogue and performance.

A comedy team brings together a straight man (tsukkomi) who feeds punchlines to a funny man (boke).[3] A pair of comedians with a special back-and-forth style is called kakeai manzai.[2]

The history of manzai began in the Nara period.[4]

In the Edo period, the traditional dialogue was performed on stage.[1]

In modern times, manzai performances are televised in Japan.[1]

In Japan's past, traditional manzai performers would go from house to house in the New Year's season. They would sing songs[5] and perform good-luck dances in return for a small amount of rice or money.[6]

Help Improve This Page: Please contact us to become an approved KidzSearch editor and provide your credentials. You can also give immediate feedback in our Wiki Feedback Forum.[[Category:Entertainment in Japan