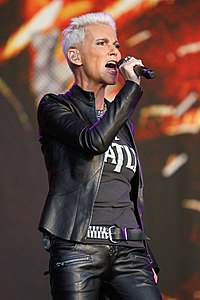 Fredriksson was known for forming pop rock duo Roxette in 1986 alongside Per Gessle. They are known for their six top two hits on the Billboard Hot 100: "The Look", "Listen to Your Heart", "Dangerous", "It Must Have Been Love", "Joyride" and "Fading Like a Flower (Every Time You Leave)".

In 2002, Fredriksson was diagnosed with a brain tumour. She died from problems caused by the disease on 9 December 2019 in Danderyd Municipality, Sweden at the age of 61. [1]