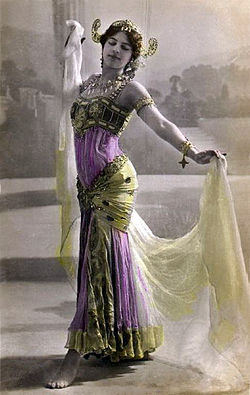 Mata Hari, exotic dancer and convicted spy, made her name synonymous with femme fatale during World War I.

She was a Dutch-Frisian exotic dancer and spy. She was executed by a firing squad of the French Army. French authorities thought she was a spy during World War I. Because she had relationships with both German and French officers, they thought she was a double agent (working for both sides). Her dossier (file) was released in 2017, a hundred years after her death.

German documents unsealed in the 1970s proved that Mata Hari was truly a German agent. In the autumn of 1915, she entered German service.

On the orders of section III B-Chief Walter Nicolai, she was instructed about her duties by Major Roepell during a stay in Cologne. Her direct handler was Captain Hoffmann, who gave her the code name H-21.[1]