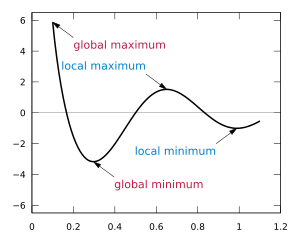 In mathematics, the maximum and minimum of a function are the largest and smallest value that the function takes at a given point.[1][2][3] Togther they are known as the extrema (singular: extremum).

Minimum means the least you can do of something. For example, if the minimum amount of dollars you must pay for something is seven, then you can not pay six dollars or less (you must pay at least seven). You can do more than the minimum, but no less. Maximum means the most you can have of something. For example, if the maximum amount of oranges you can juggle is five, you can not juggle more than five oranges. You can do the maximum or less.