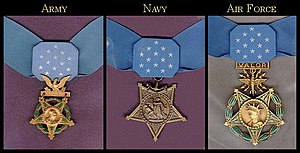 A medal is a small metal object that is given as an award for doing something very important or made to commemorate something. There are medals for sports, military, academics, etc. There also exist medals that have religious meaning.

In the Olympic Games and many other sports competitions, medals are give to the top three people that took part in the competition. The winner of the competition is given the gold medal. The silver medal is given to the person that placed second. The third place person is given the bronze medal. the term "gold medal" is often used to say that something is the best or that if it happened in a competition, that it would be the winner.