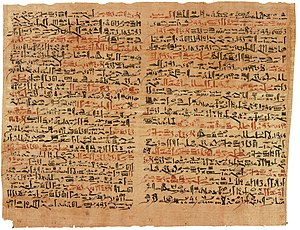 Plates vi & vii of the Edwin Smith Papyrus (around the 17th century BC), thought to be the earliest medical text.

It is thought there were more medical papyri, but many have been lost due to grave robbing. The largest study of the medical papyri to date has was undertaken by Berlin University and was titled "Medizin der alten Agypter" (Medicine of ancient Egypt).

Early Egyptian medicine was based on a mixture of magic and religious spells. Most commonly "cured" by use of amulets or magical spells, the illnesses were thought to be caused by spiteful acts or actions. Afterwards, doctors did various medical treatments if needed. The instructions for these medical rituals were later inscribed on papyrus scrolls by the priests performing the actions.