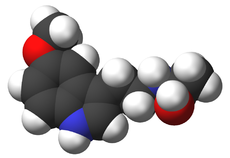 Melatonin is a hormone found in animals, plants, and microbes.[1][2][3] In animals, levels of melatonin have a daily cycle. It drives the circadian rhythms of several biological functions.[4]

Melatonin is produced in the pineal gland which is outside of the blood–brain barrier. It acts as a hormone, and is released into the blood.[5]

Melatonin acts on melatonin receptors.[6] It also acts directly because it is a powerful antioxidant,[7] which protects DNA.[8]

Melatonin supplements for humans can be given. Melatonin is categorized by the US Food and Drug Administration (FDA) as a dietary supplement, not a drug.[9] A prescription-only, timed release melatonin product for people aged 55 and over was approved for use by the European Medicines Agency in 2007, despite having shown only small effects,[10] and in Australia in 2009.[11]