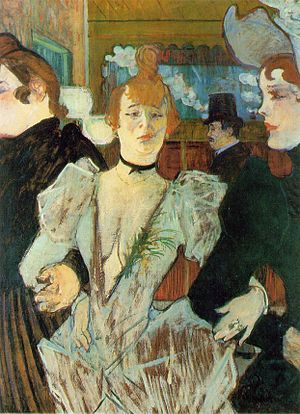 Poster for the Moulin Rouge by Jules Chéret

Moulin Rouge (Red Windmill) is a traditional cabaret and nightclub which began in 1889. It is on Boulevard de Clichy in the 18th arrondissement (district of the city). This is near the French quarter of Montmartre in the red-light district of Paris called Pigalle. The theatre can be recognized by the large red windmill on its roof.

The Moulin Rouge puts on cabaret shows every day. It is where the famous French dance, the Can-can, was first performed. It is also famous because many artists and writers have often gone there. Henri Toulouse-Lautrec designed many posters for the cabaret. Because of this, the management always set aside a table where he could have a meal and watch the show.

The ingredients for its success are said to be: [1]