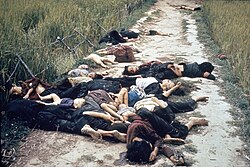 A picture of victims of the My Lai Massacre

The My Lai Massacre (pronounced IPA: [mi.˧˩˥'lɐːj˧˧], Thảm sát Mỹ Lai, Thảm sát Sơn Mỹ) was the killing of hundreds of civilians by United States troops at the village of My Lai, Vietnam on March 16, 1968. A memorial in My Lai lists the names of 504 victims.

Before the massacre, U.S. troops were told that all of the "true" civilians would be at the market and the remaining people would be members of the National Front for the Liberation of South Vietnam. When the soldiers got to the village they did not find any NLF troops. Despite this, many troopers began to kill the villagers, mainly elderly people, women, and children.

The killings were stopped by an American helicopter pilot.

The killings were covered up by the United States Army, but eventually 26 soldiers were charged with being involved in the killings. However, only one, Lieutenant William Calley was found guilty.

The massacre caused public opinion in the United States to shift further towards wanting peace.