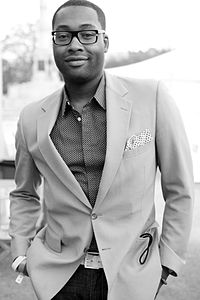 In 2005, Knight auditioned for the second season of the Bravo network reality television series, Project Runway, but he was not accepted as a season two contestant. In 2006, Knight reauditioned for Project Runway, and this time he was accepted as a contestant for season three. Knight went on to win season three's Fan Favorite award and to place fourth in the overall competition.[2]

In 2007, Knight introduced his label, Mychael Knight, on BET's Rip the Runway [3] and he designed a line of custom tees for the Starbucks Corporation.[4]

Knight died on October 17, 2017 in Atlanta, Georgia at the age of 39.[5] His death was possibly related to recent treatments for intestinal infection.[6]

Help Improve This Page: Please contact us to become an approved KidzSearch editor and provide your credentials. Provide feedback on this article in our Mychael Knight Forum