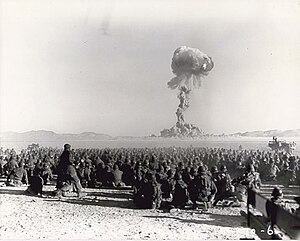 November 1951 nuclear test at Nevada Test Site. Test is shot "Dog" from Operation Buster. This had a force of 21 kilotons. It was the first U.S. nuclear field exercise on land. The troops shown are only 6 miles from the blast. 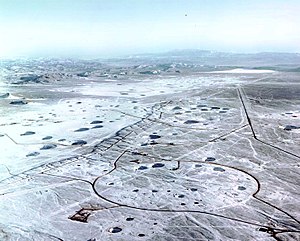 Craters along the test side

The Nevada Test Site is an area set aside for the testing of nuclear weapons. It is looked after by the United States Department of Energy. It is in Nye County, Nevada, about 65 miles (105 km) northwest of Las Vegas.

The site was begun on January 11, 1951. It covers an area of 1,350 square miles (3,500 km²) of desert and mountain lands. Nuclear testing at the Nevada Test Site began with a one-kiloton (4 terajoule) bomb. This was the same explosive force as a bomb using 1,000 metric tons of TNT.[1] This bomb was dropped on Frenchman Flat on January 27, 1951. Many of the famous photos of the nuclear age were taken at the Nevada Test Site.

When testing ended in 1992, the Energy Department said that more than 300 million curies of radiation remained, making the site one of the most radioactively contaminated places in the United States.[2]