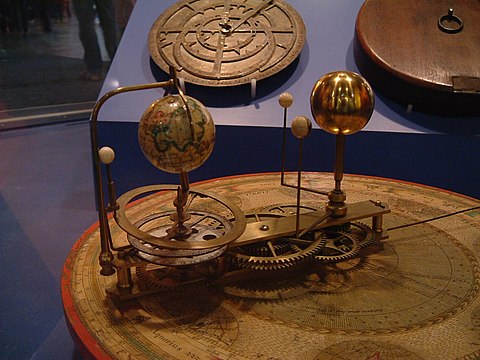 A small orrery showing earth and the inner planets

An orrery is a mechanical model of the Solar System. It shows the relative positions and motions of the planets and moons. It is usually a heliocentric model.[1]

The Greeks had working planetaria. The first orrery that was a planetarium of the modern era was produced in 1704.[2] One was presented to Charles Boyle, 4th Earl of Orrery – hence the name. They are usually driven by a clockwork mechanism. The globe in the centre represents the Sun, and a planet is at the end of each arm.

The first known orrery was the Antikythera mechanism, variously dated from 60 to 150 BC.