The Palace of Whitehall was the main home of the English kings and queens in London, from 1530 until 1698, when all except Inigo Jones's 1622 Banqueting House was destroyed by fire. Before the fire, it was the largest palace in Europe, with over 1,500 rooms (at one time it was the largest building in the world).

The palace gives its name—Whitehall—to the road on which many of the buildings of the UK government now stand. The word "Whitehall" can also refer to the central government itself.

It became an official royal palace in 1530 when Henry VII was the king of England. He also included a recreation centre with a bowling green, tennis courts, a pit for cock fighting (now the site of 70 Whitehall) and a tiltyard for jousting. It is estimated that over £30,000 (approaching £11 million in 2007 values) were spent during the 1540s, 50% more than the construction of the entire Bridewell Palace. Henry VIII married two of his wives at the palace—Anne Boleyn in 1533 and Jane Seymour in 1536. It was also at the palace that Henry died. It was a lesser used palace during the reign of the next few monarchs. 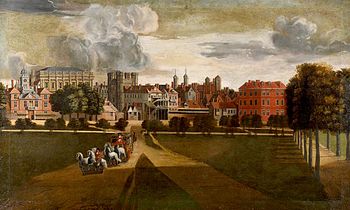 The Palace of Whitehall by Hendrick Danckerts. The view is from the west. The Horse Guards barracks is on the extreme left, with the taller Banqueting House behind it. The four-towered building is the palace gatehouse.[1]