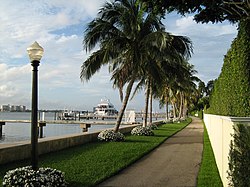 The Lake Trail along the Lake Worth Lagoon

The Town of Palm Beach is an incorporated town in Palm Beach County, Florida, United States. The Intracoastal Waterway separates it from the cities of West Palm Beach and Lake Worth. As of 2004, 9,860 people lived there.[3]

Palm Beach began as a resort town when Henry Morrison Flagler,[4] a founder of Standard Oil, built the Florida East Coast Railway down the coast of Florida. In the center of the community, Flagler built two luxury resort hotels, the Royal Poinciana Hotel and The Breakers Hotel. West Palm Beach was built across Lake Worth as a service town, and is now a major city.

Flagler's land for houses was bought by people active in the Gilded Age, and in 1902 Flagler himself built a Beaux-Arts mansion named Whitehall, designed by the New York–based firm Carrère and Hastings and helped start the Palm Beach winter "season" by entertaining visitors. The town was incorporated on April 17, 1911.

An area known as the Styx housed many of the servants, most of whom were black. The workers rented their small houses from the landowners. In the early 1900s the land owners agreed to evict all of the residents of the Styx (who moved to West Palm Beach) and Edward R. Bradley bought up much of this land.[5]