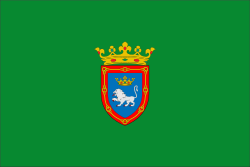 Pamplona a city in Navarre, Spain. The city is famous worldwide for the San Fermín festival, from July 6 to 14, in which the running of the bulls is one of the main attractions.[1]

After the 2011 municipal elections, there are 27 councillors in Pamplona Municipality: eleven of Navarrese People's Union (Unión del Pueblo Navarro), seven of Nafarroa Bai, three of Spanish Socialist Workers' Party, three of Bildu, two of People's Party, and one of Izquierda-Ezkerra.