Paraneoptera is a monophyletic superorder of insects.

Hemiptera is an order of insects often known as the true bugs (bug). They are about 50,000–80,000 species of cicadas, aphids, planthoppers, leafhoppers, shield bugs, and others. They range in size from 1 millimetre (0.039 in) to around 15 centimetres (5.9 in), and share a common arrangement of sucking mouthparts.

Psocoptera, the bark lice, include 4,400 described species arranged in 3 suborders. There are 50 families of bark lice with over 200 genera. This is the first insect order to show the beginnings of a transition to sucking mouthparts. It is sister group to the Phthiraptera. Bark lice are found on foliage, under bark, or in leaf litter. 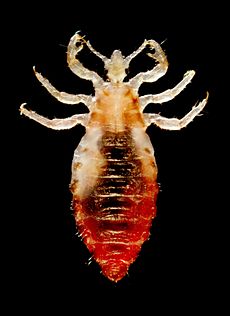 The body of a louse is dorsoventrally flattened and the eyes are absent or nearly so. The legs are strong for holding onto fur or feathers of the host. All species of lice are parasitic. Lice parasitise all orders of birds and most orders of mammals.

The mouth is in the form of an asymmetrical mouth cone, consisting of piercing stylets. Thrips are commonly found on and in flowers. Most species are phytophagous, feeding on flowers.