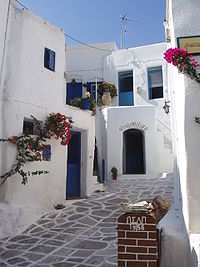 A typical village in Paros

Paros is a Greek island which belongs in Cyclades group. It is the third largest island in the Cyclades. Its area is 195 square meter and its population is 12,853. The island has got a scheme almost circular. The most largest towns in Paros is Paroikia (or Paros city) and Naoussa.

The island is very touristic. Every summer many thousands tourists came to Paros. The most of them came from European countries. The island has got beautiful beaches and very beautiful villages. The main feature of the villages of Paros is its important architecture. The houses of the villages has got cubic scheme with intense white colour. The windows and the doors has got an intense colour, usually azure or blue.[1]