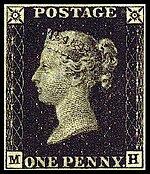 The Penny Black was the world's first adhesive postage stamp. It was issued by the United Kingdom on the 1 May 1840 and used from the 6 May the same year. All London post offices received official issues of the new stamps, but other offices in the country did not. Some post offices like in Bath, offered the stamp unofficially after 2 May.

A Penny Black with a red cancellation on it