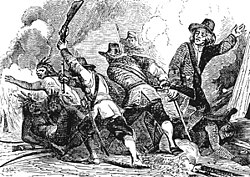 A drawing of the Pequot War

The Pequot War (1634-1638) was fought between the Pequot tribe and settlers of the Massachusetts Bay, Plymouth, and Saybrook colonies. The settlers were helped by Native American groups including the Narragansett and Mohegan tribes. Hundreds of people were killed, and hundreds more were sold as slaves in the West Indies.[1] At the end of the war, about 700 Pequots had been killed or captured.[2] The others were forced off their lands and into other areas.