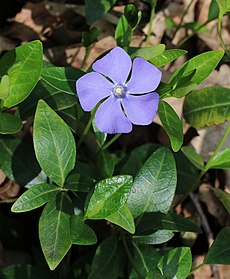 Periwinkle is a color in the blue family. Its name comes from the lesser periwinkle or myrtle herb (Vinca minor) which has flowers of the same color.

The color Periwinkle is also called lavender blue.[1] The color periwinkle may be considered a pale tint of indigo – a pastel indigo.

The first written use of periwinkle as a color name in English was in 1922.[2]

Periwinkle is also the favorite color of Perry the Platypus from the children's television series, Phineas and Ferb.