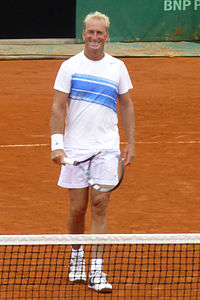 Peter McNamara (5 July 1955 – 20 July 2019) was an Australian tennis player and coach. McNamara won five singles titles and nineteen doubles titles in his career. He won the 1980 and 1982 men's doubles championship at Wimbledon and the Australian Open doubles in 1979. McNamara's highest rank in doubles was No. 3. He was born in Melbourne.