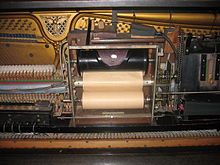 Inside a pianola. The paper roll, and the air tubes can be seen

The pianola (pronounce: "pee-ah-NO-la"), also called the player piano, is a piano which has a pneumatic mechanism so that it can play by itself. The air for this system came from a pump operated by the players feet, and in some later models, an electric pump. Inside the piano are paper rolls which have holes punched in. These holes release air which in turn triggers the keys to play. When the pianola plays itself the keys of the piano can be seen "playing themselves".

The pianola was developed around the 1880s. It was fitted with control levers so that the player ("player pianist" or "pianolist") could play in the way he wanted. The pianola made it possible for the player to sound as if he was playing very difficult music that he was not capable of playing. At the same time he could control the performance.

The pianola became popular in the late 19th and early 20th century as mass-produced pianos became popular in people's homes and more and more people bought sheet music. By the 1920s it started to become less popular again as the gramophone had been invented.

A pianola is the same as any other piano except it is fitted with a pneumatic player action, which plays paper rolls. This mechanism consists of about one hundred bellows, large and small, the smaller ones being called pneumatics of which there are 88, one for each note on the piano.The largest are the foot operated ones,called the bellows. Other pneumatics of varying sizes operate the roll motor, tracking device, motor speed governor, and the sustain and soft pedals.

Help Improve This Page: Please contact us to become an approved KidzSearch editor and provide your credentials. Provide feedback on this article in our Pianola Forum