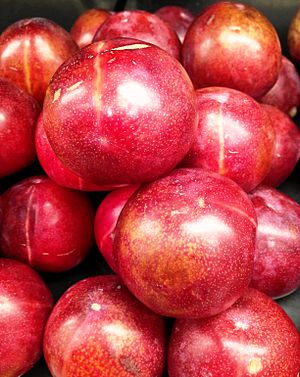 The plumcot is a hybrid fruit. A plumcot is part plum and part apricot.[1] There are many different types of plumcot. Some of them are about half plum and half apricot, while others are mostly plum. One well-known type of plumcot is called the pluot, which is a trademarked[2] name for plumcots that were developed in the 1980s by Floyd Zaiger.[3] The first plumcots were bred in the late 1800s by Luther Burbank.