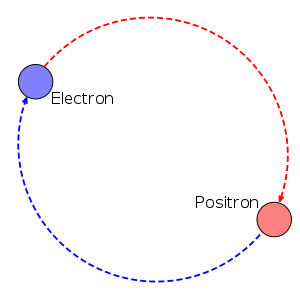 An example of a Positronium atom, with a positron and an electron in the same orbital

Positronium is an onium, a type of exotic atom that is made of a particle and its antiparticle. In Positronium, one positron and one electron are bonded together. The positron replaces a proton that would normally be present in a Hydrogen atom. They both stay in the same orbital. A few nanoseconds after it is created the Positronium is destroyed and it forms two gamma rays.

Positronium can form molecules, like normal atoms. It can bond with both other exotic atoms and normal atoms.

Di-positronium is a simple molecule made from two positronium atoms bonded together. It was predicted in 1946 by John Archibald Wheeler, but was discovered in 2007 by David Cassidy and Allen Mills, when they fired positrons at molecules of silicon dioxide.

Positronium hydride, also called hydrogen positride, is an exotic molecule made of an atom of hydrogen bonded to a positronium atom. It was predicted in 1951 by A Ore, but was not discovered until 1990 by R. Pareja and R. Gonzalez, who discovered it when they trapped positronium in hydrogen-magnesia crystals.