Stalin, Truman and Churchill in that order

The first conference was held at Yalta, but the allies did not agree on anything very important. However, a lot had happened since the Yalta Conference. Firstly, the USA had a new president named Harry Truman. He was much tougher on Communism than the previous president, Roosevelt, had been. This was a problem for Stalin. Also, Churchill had been voted out and was replaced by Clement Attlee. Stalin saw himself as far more experienced than these new leaders. Stalin also caused trouble, as some of what the allies agreed on at Yalta was that Poland should have a neutral government. Stalin had killed the neutral government leaders and replaced them with ones that would listen to him. This meant that there were a lot of problems at Potsdam. 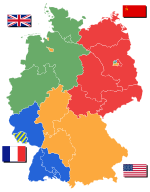 The allies talked about and agreed that:

The allies talked about but did not agree on: