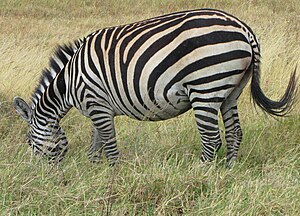 Pregnancy is when a female mammal has an unborn baby inside her. During pregnancy, a female is called "pregnant". A human pregnancy is about 38 weeks long, from conception to childbirth. Usually the mother has one baby at a time. Sometimes the mother has two babies at one time. Two babies are called twins. The mother can have three or more babies at one time. This does not happen very often in humans.[1]

Pregnancy usually starts after a woman has sexual intercourse with a man. Her ovum (or egg) and his sperm (seed) come together and form a zygote (fertilized egg) inside her.

Some people have trouble becoming pregnant. This is called infertility. Women and men with infertility may take drugs or have surgery to help a pregnancy start. Some people use treatments that are not natural, like in vitro fertilization, to become pregnant with the help of a doctor.

Growth of the baby

When the woman's egg and the man's seed come together, it makes one cell called a zygote. The zygote grows into an embryo, which grows into a fetus. When the fetus is ready, the baby is born.

Giving birth can hurt a lot at the end. In hospitals, a doctor or midwife can give drugs to the mother to reduce the pain.

If the baby cannot be pushed out, then a doctor can cut the mother open to take the baby out. This operation is called a Caesarean section.

The Convention on the Elimination of All Forms of Discrimination against Women says that pregnant women must be given time away from work or equal welfare for her baby without losing her job (Article 11).

A pregnancy can also stop without the baby being born. This is called abortion. Doctors can do things that will stop a pregnancy. Such an abortion is called induced abortion. Countries have different laws about induced abortions. Some countries allow it, and others do not. In some countries, it is allowed, but only for certain reasons, such as the pregnancy resulting from rape, or a doctor saying that the pregnant woman might die if the pregnancy is not stopped. People also have different opinions about abortion. Often, these are influenced by religious beliefs.

There are a few diseases that can kill a woman or make her very ill if she has a baby. Having abortions could save the lives or health of these mothers.