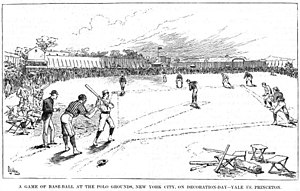 Princeton is one of the 8 Ivy League colleges. It was the fourth official college in the United States.[2]

Princeton's main library, Firestone Library, is one of the biggest university libraries in the world.

In 2013 Forbes put Princeton at number three in their list of "America's Top Colleges".[3]

Template:Colleges and universities in New Jersey

Help Improve This Page: Please contact us to become an approved KidzSearch editor and provide your credentials. Provide feedback on this article in our Princeton University Forum