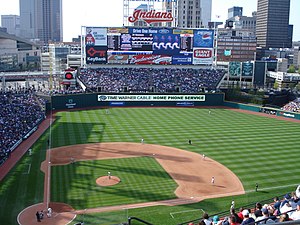 Progressive Field is a baseball park in Cleveland, Ohio. It is the home field of the Major League Baseball team called the Cleveland Indians. It opened in 1994, replacing Cleveland Stadium, which had been the Indians' home for over 60 years.