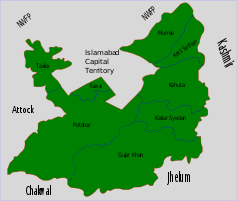 Rawalpindi (Urdu: راولپنڈی, Rāwalpindī) is a city in the Pothohar Plateau near Pakistan's capital city of Islamabad, in the province of Punjab. It is home to the headquarters of the Pakistan Army and also served as the nation's capital while Islamabad was being constructed during the 1960s. The city is home to many industries and factories. Benazir Bhutto International Airport is actually in Rawalpindi, formerly known as the "Chaklala Airport", serving the city along with the capital. Rawalpindi is in the Punjab province, 275 km (171 miles) to the north-west of Lahore. It is the administrative seat of the Rawalpindi District. About 3,363,911 people lived in Rawalpindi in the year 1998.