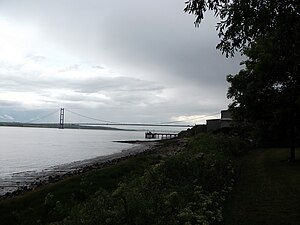 The River Humber is a large deep water estuary on the east coast of Northern England. It is formed by the River Ouse and the River Trent coming together. From here to the North Sea (about 40 miles) it forms part of the border between the East Riding of Yorkshire on the north side and Lincolnshire on the south side. The Humber's only modern crossing is the Humber Bridge. At one time it the longest single-span suspension bridge in the world. Now it is the fifth longest. Before the bridge was built in 1981, paddle steamers were used to cross the mile long span.

In the middle ages the tides of the Humber kept armies from crossing. At that time it was thought to be an arm of the ocean.[1] During the Anglo-Saxon period, the Humber was a major boundary, separating Northumbria from the southern kingdoms.[1] The name Northumbria came from Old English Northanhymbre meaning "the people north of the Humber".[2] The Vikings used the Humber and its two tributaries, the Ouse and Trent, with their shallow-draft Longships to raid all over northeastern England.[3] 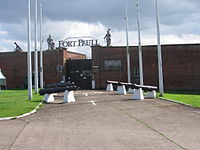 Fort Paull was a Napoleonic era fort built in 1542 to protect the port there.[4] The site dates back to 910 when it was a lookout for Viking raiders. The current fort is designed as a pentagon and was built from 1861–1864. It was disarmed at the beginning of the First World War and replaced by two nearby forts. One was on Sunk Island; the other was at Stallingborough.[4] In 1960 the fort was finally closed down. But in 1964 a group of volunteers took over the fort and made it into a Museum.[4]