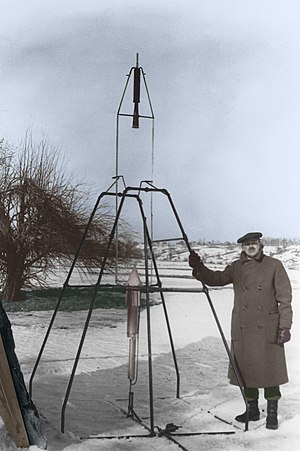 Goddard with his first rocket

Robert Hutchings Goddard (1882-1945) was an American scientist who designed, built and fired rockets. In 1918 he invented the bazooka for the United States Army.

On March 16, 1926, he launched the world's first liquid fueled rocket.[1] It reached a height of 56 metres (184 feet) at a speed of 100 kilometres per hour (62 miles per hour).[2] When he suggested that a rocket could travel fast enough to leave the Earth and reach the Moon, the newspapers made fun of him.[3] Many of his ideas, such as multi stage rockets, and the concept of escape velocity are now part of modern rocket science.[3] He has been called "the father of space flight."[3]

Help Improve This Page: Please contact us to become an approved KidzSearch editor and provide your credentials. Provide feedback on this article in our Robert H. Goddard Forum