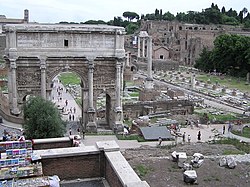 Part of the Roman Forum.

The Roman Forum is an area of the city of Rome which the ancient city developed around. It is the place where commerce, business, cult, and the administration of justice took place.

It was for centuries the centre of Roman public life. It was the site of triumphal processions and elections; the venue for public speeches, criminal trials, and gladiatorial matches. It was also the heart of commerce. Here statues and monuments mark the city's great men. It has been called the most celebrated meeting place in the world, and in all history.[1]

The Forum is in the small valley between the Palatine and Capitoline Hills. Today it is a sprawling ruin of architectural fragments and excavations. It has 4.5 million sightseers each year.[2]

Buildings in the Forum

The Roman Forum is famous for the number of buildings and other ancient ruins that it contains. These include: