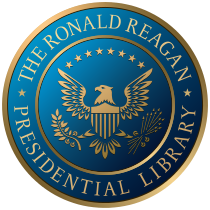 The Seal of the Ronald Reagan Presidential Library

A larger scale of the library

The library is located in Simi Valley, California. The Reagan Library is the largest of the thirteen federally operated presidential libraries.[1] The street address, 40 Presidential Drive, is numbered in honor of Reagan's place as the 40th President.

Construction plans for the library included to build a tomb for the eventual use of Reagan and Nancy. Following a sunset service on the library grounds the last evening, on the morning of June 12, 2004 Reagan was laid to rest in the underground vault.[2] Nancy Reagan, who died on March 6, 2016, was buried at the library next to her husband on March 11.[3]