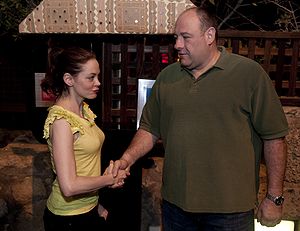 Rose McGowan (born September 5, 1973 in Florence, Italy) is an American actress. She performs in both movies and television. She began acting around 1992 in the comedy Encino Man. However, it was the 1995 comedy The Doom Generation which made her famous.

McGowen has been on the covers of many magazines, including Rolling Stone, GQ and Seventeen Magazine.