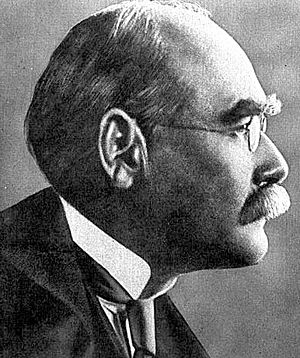 Lua error in package.lua at line 80: module 'Module:Icon/data' not found. Joseph Rudyard Kipling (30 December 1865 – 18 January 1936) was an British author and poet. He was born in Bombay, India. He wrote children's fiction, like Kim, The Jungle Book and Puck of Pook's Hill. He also wrote the well-known poems, If — and Gunga Din, and many short stories set in India. He was awarded the 1907 Nobel Prize in Literature. He spent part of his life living and writing in New England with his American wife but returned to England to live in Sussex.

Kipling died of a perforated duodenal ulcer in Fitzrovia, London in 1936 and is buried in Westminster Abbey, London.