Armed Forces of the Russian Federation 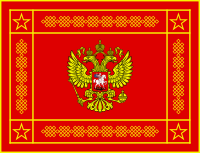 The banner of the Armed Forces of the Russian Federation.

When the Soviet Union broke up, Russia and the various other countries got parts of its large armed forces. The country's president, Boris Yeltsin, had to fix Russia and build up the military. So, Yeltsin appointed himself the Russian minister of defence. Eventually, CIS helped Russia get its defence into shape. Then in 1993, a doctrine was made to set up the official military.