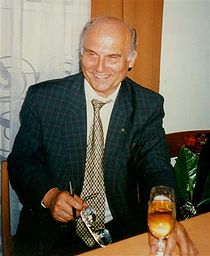 listen (info • help) (b. March 4 1932 in Pińsk, d. January 23 2007 in Warsaw) was a popular Polish journalist. He was well regarded both at home, and abroad. During his life he became known for his way of reporting news. He was a foreign correspondent for the Polish press agency. He was shortlisted as a candidate for the Nobel Prize for Literature, but also received many other awards. He is one of the Polish authors whose works get translated most often.