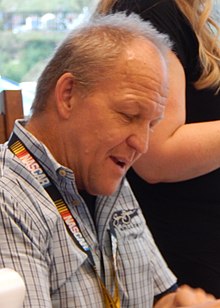 Sam Bass (November 20, 1961 – February 16, 2019) was an American motorsports artist. He was known for being NASCAR's first officially licensed artist.[1] He was born in Hopewell, Virginia. Bass was the designer for four-time Monster Energy NASCAR Cup Series champion Jeff Gordon's No. 24 cars throughout his Cup career. Bass also designed the cars and uniforms for the movie Talladega Nights: The Ballad of Ricky Bobby.[2]

Bass died of sepsis complicated by kidney disease and diabetes on February 16, 2019 in Concord, North Carolina at the age of 57.[2]