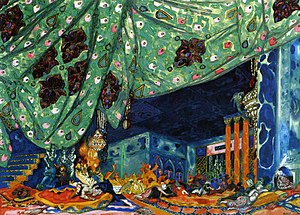 Scene for the ballet Scheherazade, by Bakst 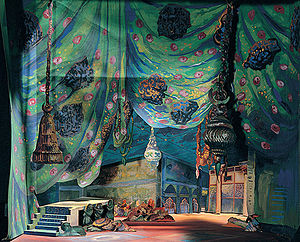 Scene for the ballet Scheherazade, by Bakst

Scheherazade is a legendary Persian queen who is the storyteller in One Thousand and One Nights.

The story, which was written many hundreds of years ago, tells of a Persian king who married a young girl every night. At the end of every night she would send his new wife to have her head chopped off. He had already killed 3000 women in this way.

Then, one day, Scheherazade heard about the king. She said she wanted to spend the night with him. Her father disagreed, but she still went. She spent all night telling him a story. At the end of the night she stopped the story at an exciting moment. The king wanted to hear the end of the story, but Scheherazade said he would have to wait until the next night to hear the rest.

The next night she finished the story and began another one, which she again stopped when it was dawn. The king had to wait another night to hear the rest of the story. Scheherazade kept this up for 1001 nights. She told him 1001 stories. In the end the king had fallen in love with Scheherazade and they already had three children, so he did not have her executed.[1]

The main part of these stories is formed by an old Persian book called Hezar-afsana or the "Thousand Myths" (Persian: هزارافسانه).