Racial segregation is the term used to describe the separation of people based on race. This has been encouraged in many countries and made law in others. For example, the United States of America segregated African Americans and European Americans for many years. In South Africa, native Africans and European settlers were divided as well, under the system of apartheid. 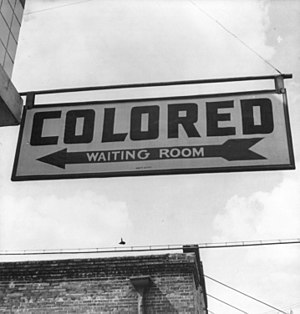 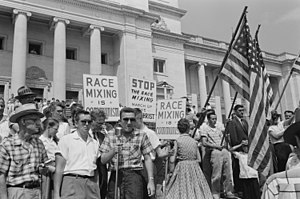 A rally against school integration in 1959

In the United States

There was still much racism and African Americans were not treated fairly. There were many laws that kept them working in hard jobs for little money, and laws that prevented them from marrying European Americans. Slavery had ended, but segregation had not. Black Americans in the south, and in some places in the north, were not allowed to attend the same schools as white Americans, but had to attend black-only schools. Buses and shops had separate sections, and some simply didn't allow black people. Restaurants and hotels were usually completely separate. There were black and white parts of towns and cities, in most of the country.

It was not until the 1950s and 1960s that things began to change. A man named Martin Luther King, Jr. began to rally for equal rights for blacks. He led many African Americans on marches to protest the way they were treated. He was killed in 1968, but four years earlier he convinced the government to allow black Americans to vote in the presidential elections. In the law case Brown v. Board of Education, the government went on to force integration in high schools throughout the United States, making it illegal to have white-only schools. For a while, armed police officers had to escort black students into formerly white-only schools, and it took many years for the schooling system to change. It took many more decades to get rid of all the racist laws.

African Americans now have all the same rights as European Americans and other Americans, but there is still some racism in the United States of America as there is in every country.