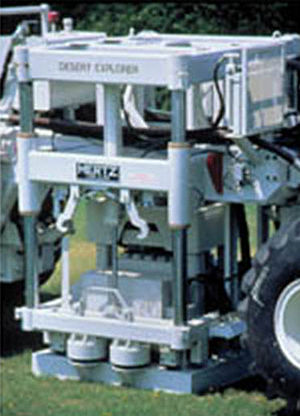 A thumper for active seismology work

Seismology is the study of what is under the surface of the Earth by measuring vibrations on the Earth's surface. A person who does this is called a seismologist.

It is part of the science of geophysics, which studies the physics of the processes that formed the Earth and other planets.

Seismology is done by seismologists and geophysicists using devices to pick up the vibrations called geophones, hydrophones or seismometers.

Seismology can either be passive, just listening to vibrations caused by earthquakes and volcanic activity, or active, using small explosive charges to send vibrations into the ground.

Seismic detectors come in two types, one which measures up and down vibrations, and one which measures side to side vibrations. Both types use and arrangement of a magnet and a coil of wire which will convert the vibrations into an electrical signal which can be stored in a computer for analysis. The earliest seismometer was developed by the Chinese.

Seismologists can find the location of earthquakes by plotting received vibrations on a map. They can also pick up underground nuclear tests, and this is what many of the seismic recording stations were set up for.