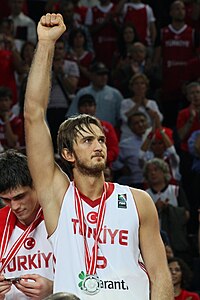 Semih Erden (born July 28, 1986 in Istanbul, Turkey) is an Turkish basketball player who currently plays for the Cleveland Cavaliers of the NBA. He was selected 60th overall in the 2nd round in the 2008 NBA Draft by the Boston Celtics, while he was playing for Fenerbahçe Ülker in his homeland. Erden arrived in Boston for the 2010–11 season, but was traded to Cleveland near the end of the season. During the 2011 NBA lockout, he returned to Turkey and played for Beşiktaş; after the lockout ended in December 2011, he returned to the Cavaliers.